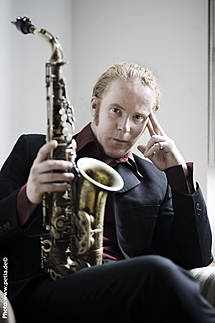 Hayden Chisholm (Auckland, New Zealand, 1975)
Born and raised in New Zealand, Hayden Chisholm has risen to become one Europe’s most distinctive and innovative voices on the saxophone. After studying in Cologne with a DAAD scholarship he continued his music studies in Japan in India. His compositions have been recorded by BBC and WDR radios and he has toured extensively worldwide as a soloist.  He has created music for the installations of seminal artist Rebecca Horn as well as composing music for the acclaimed film “Moon Mirror Journey” . He is credited with developing a new microtonal language for saxophone in the mid 90′s. In 2011 he launched the Moontower Foundation Music edition.

13 Views of the Heart’s Cargo

This 13 CD box set is the summation of everything important I have recorded as an leader/initiator so far in my life. It documents important musical occurrences and collaborations dating back to 2002. Here in this post, I give a short introduction to each CD Below. Inside the box set, there is a 76 page booklet detailing the works. There is a portrait film here by Plushmusic and sample tracks can be heard here.

The official release date is January 27, 2013 but the first boxes can already ordered now by sending a mail to hayden(at)softspeakers(dot)com. Total price is €150/- with free shipping worldwide, payable with paypal.

From the release date in Jan. 2013, individual CDs will be available with the exception of the Lula Pena and John Taylor disc.

All of the boxes are made by hand in a strictly limited edition and I’ve created the calligraphy myself meaning each box is different.

Finishing this was one of the biggest marathons I’ve ever undertaken. Above all I am indebted to all 23 wonderful musicians who appear in this box set.

MT13- My Blood flows from Scotland to Armenia

This is the first time I have approached the music closest to my blood, that of Scotland.  The first half of the CD features my arrangements of traditional Scottish melodies. The second half features a duo with Pina Betina Rücker whose incredible musicality brings the crystal sound bowls to life.